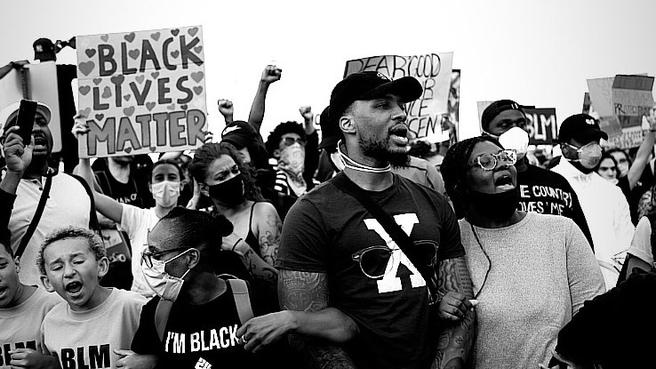 July 29, 2020 Cameron Wheeler Politics Comments Off on Attorney General Barr was Questioned About the Assault on Navy Veteran Christopher David in Portland

The questions ranged widely throughout the hearing and varied greatly by party. The topics included the murder of George Floyd and the ensuing worldwide protests to support the Black Lives Matter movement, the Roger Stone case, the Michael Flynn case, the Mueller Report, Russian interference in the 2016 and 2020 elections, Jeffrey Epstein, the photo-op at St. Johns Church and the precursory clearing of protesters from Lafayette Park, and more.

This particular article focuses on the assault against Navy veteran Chris David by federal officers in Portland on July 18, 2020. Here you can find our more in-depth coverage of the hearing and its highlights.

Throughout four and a half hours of political rhetoric and questioning, there were a few key exchanges that stood out as profoundly disturbing.

One such instance came from Rep. David Cicilline’s exchange with Attorney General Barr regarding the assault on Navy veteran Chris David outside of the Portland courthouse Saturday, July, 18, 2020. Whether you are familiar or not with the incident in question, I believe that it is important to provide context for our readers.

Chris David is a 53 year old Portland native and Navy veteran. He is a laboratory scientist at the VA Hospital and has been described as a disabled, Navy veteran and has been lovingly dubbed “Captain Portland” & “Superman” by portions of the internet.

ABC 7 News interviewed Mr. David about the incident after he returned from his trip to the hospital.

When asked why he decided to go down to the protests that night Mr. David responded, “I had been seeing a lot of videos recently of men in camies with no insignia abducting citizens off the streets of Portland and throwing them into vans and taking them who knows where. And that’s very disturbing to me for a bunch of reasons…”

He said that the biggest reason that those types of incidents disturbed him was because, “If the federal government can dress that way and do that kind of thing, anybody can…it’s a very slippery slope.” Mr. David said he saw what he believed to be “very unconstitutional behavior down at the protests.”

He went on to say, “The protests are about Black Lives Matter, and I think we need to remember that, because that is being eclipsed by this ‘war’ that’s developed on the streets of Portland…and when I say streets of Portland, it’s not a very big area of Portland, the media is making it look like the entire city is engulfed in flames, it’s not, it’s just a few block area around the federal courthouse.”

Indeed, many media accounts and narratives from political officials have tried to exaggerate the extent of the protests and demonstrations in Portland.

When asked why he chose to wear the Navy hoodie that we see in the video, Mr. David’s response was straightforward: “Well, I wanted to go down there and ask the officers, the federal officers, why they were violating their oaths to the constitution?”

He said, “I actually just wanted to ask them a question, so I decided to go down there and put on all my Navy gear as a way of trying to identify myself as a veteran. And I was hoping that on the other side there would be veterans as well and it would give them pause long enough that we could actually have a conversation, but that was a complete mistake, they didn’t care.”

Mr. David relayed that as he was approached by federal officers one of them leveled a rifle at his chest before lowering it again, while another officer pushed him back while he attempted to ask them his question. He noted that he was not even standing on federal property, but was in the street when pushed by one of the officers. “After they knocked me back, and I sort of stood there, I stopped talking because I knew what was going to happen, they were going to beat me, so I relaxed so it wouldn’t hurt so much, and then they beat me.”

The video evidence is demonstrably clear that Chris David posed absolutely zero threat to the officers or the federal property that they are supposedly there to protect. Yet, because he showed up to exercise his rights, he was beaten badly enough to require surgery.

After he was assaulted, Mr. David inadvertently walked into a cloud of tear gas while trying to get as far away from the courthouse as he could. He mentioned that he was helped almost immediately by some of the courageous street medics that have been coming out every night in Portland to provide immediate first aid to protesters. As he was being guided to a medic area it was revealed that even that area was being overrun by federal officers.

When asked if he thought that it would’ve been much worse if he was black, Mr. David noted that, “I think so…well, I don’t know if it’d been a lot worse if I’d been black, I don’t think they care who they’d beating up, they’re gassing pregnant moms, they’re beating up old veterans, I don’t think color matters in this circumstance, I think the reason why I didn’t get beat worse was because I didn’t fall down.”

In all likelihood, had Chris David been black, he would have suffered a more severe beating, but that is simply a counterfactual question that we cannot know. In some ways that question from the news anchor is itself disingenuous, it seems to postulate what may have been rather than focus on the data that we have in front of us. That data is clear, black Americans are often treated very differently than their white counterparts when it comes to interactions with law enforcement and the criminal justice system.

Mr. David’s point here is a profound one that everyone needs to realize: when you break from the dominant culture, or identity group you often lose the privileges that were once afforded to you. In this case, the situation occurred within a country and law enforcement system that was founded on and built around white supremacy. Chris David’s actions, merely by showing up in solidarity to assert the notion that Black Lives Matter, was a break in white solidarity that subjected him to beatings and constitutional rights violations that very few right-wing demonstrators have experienced.

Mr. David made sure to emphasize this particular point: “I would like the attention to diminish on me, if not completely go away, and I want to reemphasize that this movement is about Black Lives Matter, it’s not about a civil war in a small little section of Portland, and I think that’s getting lost these days, principally because the media is focusing only on a small little section in Portland and all the conflict that is occurring there, and I think that is happening for a particular political reason. This type of reaction by the federal officers I think is intentional, because they go out and do the same thing every night and then the protests only grow larger every night.”

Although Chris David is “not a fan” of his nickname “Captain Portland” or the attention he has received, his actions are nothing short of heroic. Despite getting pepper-sprayed and his hand broken he is actively working to create a coalition of veterans to link arms around the federal courthouse and just “take whatever the federal officers give us non-violently.” He has also set up a fundraiser in order to support the courageous street medics that have been active around Portland for the duration of the protests. In just four days the campaign met its goal of $30,000, which will be donated to the food banks and street medics around Portland. The campaign has since ended so that they can focus their efforts on the “Wall of Vets.”

Now that we have the context of the Chris David incident in Portland, let us transition back into the House Judiciary Committee hearing yesterday on Oversight of the Department of Justice.

Attorney General Barr was accused of using federal officers to clear and combat protesters for political reasons multiple times throughout the hearing yesterday. Multiple members of the House alleged that he was using these protests and clashes with federal officers in order to create campaign footage for President Trump’s re-election campaign.

However, Rep. Cicilline’s questions of AG Barr were some of the most direct, straightforward, and piercing.

Attorney General Barr’s unwillingness to condemn those particular actions of federal officers should be striking, especially considering AG Barr could be considered one of the more reasonable people within the Trump administration. His rhetoric of keeping “law and order” echoes that of the president and falsely characterizes the protests and demonstrations across the country.

If American citizens are to be subjected to pepper-spray and beatings for exercising their constitutional rights, for protesting peacefully, then it seems we have not come as far as we would like to think.