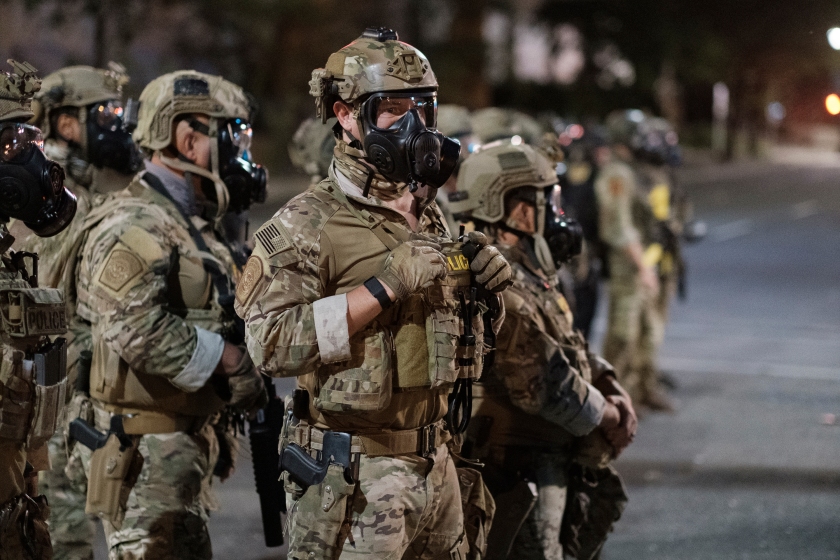 At one point during the interview the conversation turned to Portland. Swan began by claiming that he is sure the president has seen the disturbing footage of agents in fatigues beating the Navy veteran:

Swan tried to push back against Trump’s rambling and refocus his question on tactics used by federal agents. Various agencies have been activated by the Department of Homeland Security (DHS) to send personnel to various cities around the country as response teams to provide federal infrastructure. However, the primary concern of the use of these agents for many citizens is the tactics that they are using on their fellow Americas. These agents are often nameless and voiceless, dress in military fatigues, use unmarked vehicles to arrest citizens, and have been using show-of-force techniques to escalate tensions and violence.

However, President Trump continued to praise the agents as very strong and highly trained, even though a DHS memo revealed that these officers were not properly trained to handle mass demonstrations. The president explained that these agents do not have their names or other identification on their uniforms because, “these terrorists, these Antifa people, these people that are anarchists and agitators” would doxx the agents and scare their families. However, Trump failed to mention that right-wing extremists often doxx their enemies as well. The president and his administration has consistently characterized Antifa and protesters as “anarchists and agitators” that are causing all of the violence in protests around the country, despite recent studies that show that right-wing extremism has been much more deadly and prevalent over the past two decades.

Apparently, public accountability and transparency is akin to domestic terrorism in the eyes of the president, but that isn’t really new. It is also curious how this criticism of “doxxing” doesn’t go both ways. DHS has been creating files and dossiers on activists for years and have attempted to tie them to international terrorist organizations. So when the government gathers, broadcasts, and uses personally identifying information, it is considered ‘intelligence’ but when citizens do it, it is ‘doxxing.’ With the president, there is no middle-ground or balance between extremes.

In short, President Trump sees absolutely no reason why federal agents arresting American protesters in cities should have any identifying information.

You can watch the full interview here.